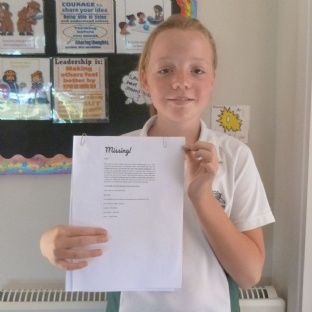 While schools were forced to close during the lockdown period, Kitebrook Preparatory School in the Cotswolds brought their pupils together in distance learning classrooms, building on their education as they would have in school, while also encouraging the children to get involved with new and exciting projects.

One such project came from The Chipping Norton Theatre, while also physically closed, continued to reach out to theatre-goers and locals, launching ‘Speak as One’, an invitation for members of the public to write their own short audio play, creating a collage of voices from within the community.

Year 5 pupil Molly J. captivated the reader’s panel of award-winning playwrights, producers, actors and theatre-makers with her piece, Missing! which was chosen to be recorded by a team of professional actors and shared with audiences across the county, airing on BBC Radio Oxford and as part of the theatre’s newly launched podcast series.

Proud Kitebrook teacher Emily Scates said: “Molly is a fantastic creative writer and certainly a talent to watch. She has always enjoyed writing and acting and wrote a moving play for the Year 5 production and then took the initiative to enter a national competition, succeeding in her script, Missing!, becoming one of the 14 entries selected for production by The Chipping Norton Theatre. Molly has used lockdown to really hone a skill and we applaud her.”