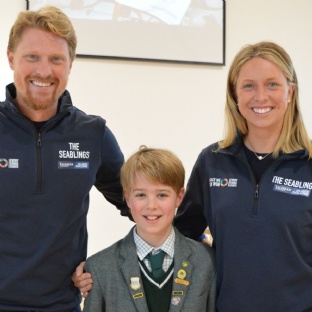 World record-holders and Gloucestershire siblings Anna, 25, and Cameron McLean, 32, visited the pupils from Kitebrook Preparatory School after successfully completing the Talisker Whisky Atlantic rowing challenge, travelling over 3,000 nautical miles from La Gomera in the Canary Islands, across to Antigua and Barbuda.

The rowing pair, who are also son and daughter of Kitebrook Headteacher Susan McLean, returned to the Cotswold school after visiting just prior to their Atlantic crossing. On their initial visit they brought in the two-person boat and kit they would need to take with them for their ocean crossing, giving the children the opportunity to gain an insight into the huge feat they were about the undertake. The industrious duo took on this extreme endurance challenge in support of UN Women UK, the UN organisation dedicated to gender equality and the empowerment of women, with the aim to break any gender stereotypes by putting to the test what it truly means to be in the #sameboat.

On their return to Kitebrook, after completing the mammoth journey, they were able to share stories and pictures from their 43 day, 15 hour and 22 minute ‘epic adventure’. Regaling the children with how they overcame rocky boat conditions, enormous waves, acute seasickness and being circled by a tiger shark; they even had willing volunteers to come and taste some of the packet food they survived on and feel the many blisters on their hands! After being entranced by their progress the whole time they were away, their amazing account was a huge inspiration to all the boys and girls.

When asked if they were able to sum up their experience, Anna said: “It was totally unpredictable. You have no idea what you’re going to face out there. Never give up and follow your heart—we made it!” Cameron concluded: “It was an epic adventure that keeps you on the edge of your seat.”